I was flipping through the TV channels recently and came across a show on Animal Planet about hippos (that is, hippopotamuses, or is it hippopotami?).  I ended up watching a few minutes of it, and I learned that they are more advanced than humans in a few areas, which surprised me.  Obviously they’re better at being fat, but that’s not something to be jealous of.  Well, maybe they’re just big-boned… because consider this : hippos can run up to 30 mph on land.  30 mph!  Considering that they weigh anywhere from 3,000 to 7,000 pounds, and that’s quite an achievement.  They even have stubby little legs.  It’s very impressive that they can reach such speeds given those conditions.  And then all of a sudden I realized what an advantage I have in running, yet I’m pretty sure I can’t get anywhere close to 30 mph, even for a very short run.  That ain’t right!  But that’s okay, because I’ve got a number of other inherent advantages over the hippo (the main one being infinitely more intelligent). 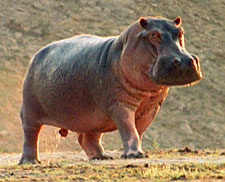 An interesting little bit of trivia about the hippo is that their skin secretes a natural sunscreen substance, to prevent them from getting sunburned.  It’s initially colorless, then turns red-orange within minutes, then turns to brown.  Sometimes I wish I had a natural sunscreen, like when I want to spend a summer day at the pool or playing baseball.

Another interesting bit of trivia is that the hippo can consume 150 pounds of grass each night.  That’s a LOT of grass!  I couldn’t eat even half of that in a day, even if it was steak with bacon and shrimp.  But that’s okay, because I’d rather not be as big as a hippo.  🙂

Also, I found something we sort of have in common with hippopotami :

Most of their defecation occurs in the water, creating allochthonous deposits of organic matter along the river beds.  These deposits have an unclear ecological function.

Most of us humans prefer to use toilets instead of rivers and lakes, creating deposits of “organic matter” in sewage treatment plants.  And like the hippo, these deposits have an unclear ecological function.  🙂

Speaking of defecation…  🙂  I heard this on the TV show and found it amusing :

To mark territory, hippos spin their tails while defecating to distribute their excrement over the greatest possible area.  Hippos also urinate backwards (are retromingent), likely for the same reason.

I had never heard of that before…  Try to picture that…  I glanced around on YouTube to find a video for your viewing pleasure, and actually found one.  It’s neat to hear the surprised screams of people who are dangerously close.  (On a side note, isn’t the Internet awesome???  You can find anything on it!)  Also, I found where a South African family has a hippo living in their house as a pet.  Now picture the hippo spinning his tail while pooping to distribute his poop over the greatest possible area — in their house.  I would find that hard to live with, but maybe that’s just me.  One of my house rules is no pooping outside of the designated toilet areas.

Glancing at Wikipedia (where I confirmed this data), I found something else kinda amusing :

Hippopotamuses appear to communicate verbally, through grunts and bellows, but the purpose of these vocalizations is unknown.

I’m no important scientist, but I suspect they say the same type of stuff other animals do, like even cats and dogs.  A grunt may mean, “That’s my food, get back!” or “Hey, baby…” or “Whew! I just farted underwater and it’s all kind of stank!”  (My interpolations of their grunts are subject to dispute with certain other scientists, but I happen to know a thing or two about hippopotami.)

Now don’t you feel more educated about hippos?  🙂  You learn something every day, they say…

5 thoughts on “random facts about hippos”