With today being election day and the predictions showing that it will be closer than it should be, it looks like half the voters will be disappointed when it’s all over.  So what better time for something funny?  Here’s more funny political pictures, to lighten the load.

As always, if you have funny commentary to contribute to any of these pictures or topics, feel free to leave a comment.  (Just remember this is a humor site, so serious rants belong elsewhere.)

(To see more funny pictures, click on the “Funny Pictures” category in the sidebar.)

Someone in Beijing, China, created a restaurant called OFC, which stands for Obama Fried Chicken, except they copied the KFC logo and might some slight changes.

And apparently KFC has made commercials in China with an Obama-lookalike.

At first, it looked like they were implying you could change from Obama to a chicken sandwich.  I know some people who would make that trade…

While verifying the story online, I saw where someone had opened a restaurant called “Obama Fried Chicken” in Brooklyn in New York City.  That took some courage…  There was a public outcry, but the owner said 4 out of 5 customers were okay with the name.  I’m sure the owner knew what he was getting into — lots of controversy, which also means free publicity.

The news has been filled lately with discussions on Congress having to raise the debt ceiling because apparently they’ve already spent money that was allocated to things like Social Security and Medicare.  (Don’t get me started on that!)  Anyway, occasionally I post a caption contest that opens the door to political humor, satire, and parody, to look at such things from a lighter side, and this is another of those times.

In this photo, President Barack Obama is sitting around an executive-style table with a number of other well-dressed people (probably politicians), and Obama looks frustrated.  I don’t know what’s really going on, so just make up something.  Feel free to rant about politics, but please phrase your rant in the form of humor.  And keep it civil and clean. 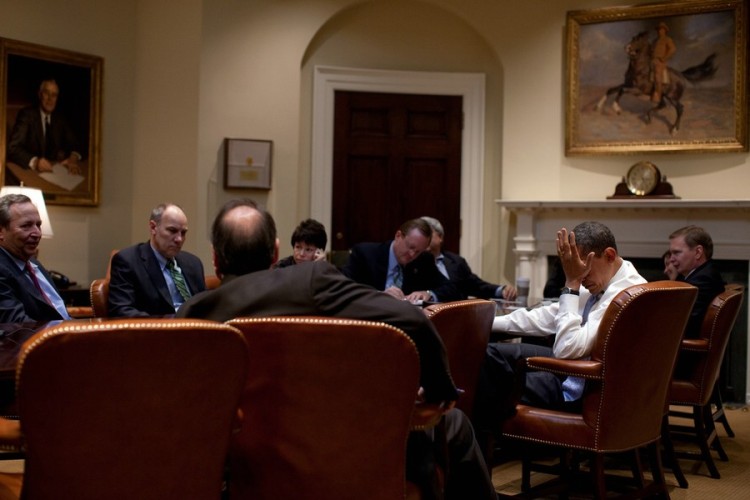 With President Barack Obama going on a 10-day trip to India, Indonesia, South Korea, and Japan, and with all the hoopla and controversy surrounding that, I figured it’s as good a time as ever to use this photo for a caption contest.   Here, Obama and his Secret Service personnel are walking into a large crowd.  Some guy in the crowd either wants to touch his face or slap him — not sure what that’s about or how that will end up.   So that’s one thing to discuss, but since a picture is worth a thousand words, there should be plenty to say.  And of course, you can always make up a story to go with it, whether based on current events or completely fictional.   So think of something funny to say about this picture and leave it in a comment for all to enjoy.