Recently I came across a news article called Five Ways the World Can End.  (No, I wasn’t searching for it on purpose!   I just happened across it while surfing around. The title drew me in.) 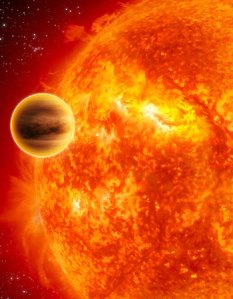 The picture represents what may happen in about 5 billion years, when the Sun grows so large that it’ll be this close to Earth.   Obviously this will cause the ultimate global warming, and all life will end.  (Ironically, there are scientists already working on this problem, even though we have 5 billion years before it’s an issue.  While it’s good to prepare for the future, there are some other issues we might ought to work on first…)

The article lists some of the standard hypotheses, like a massive asteroid impact, massive volcanic eruptions, nuclear war, black holes, and the expanding sun.  Most of those sound like natural disasters which we would have little control over, except nuclear war, which hopefully won’t ever happen.  But then the article really surprised me.  There’s a link in the article that says:

YOU DECIDE: How Do You Think the World Will End?

We get to decide?!?  Awesome!   I always figured the end of the world would happen when God brings His final judgment to humanity.  Plus, I thought the end of the world was detailed in the book of Revelation in the Bible.  But this is on a news site, so it must be factual, right?  On a side note, I wonder how FOX News got exclusive access to let us vote on how the world will end…  They must’ve paid a LOT of money for the rights to that!

Anyway, I wanted to cast my vote, so I clicked on that link, but unfortunately the comments were already closed.  So I suppose the fate of the world has already been decided…  And that page didn’t even tell us what the winning option was!  Now we’re just left to wonder…

3 thoughts on “You can decide how the world will end!”