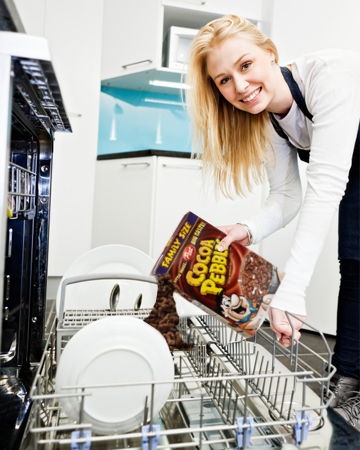 The other day I had a really random dream.  That in itself is not surprising, because I really enjoy randomness (hence why I write on this blog).  But what’s odd about it is that it featured a scenario I had never thought of before.

In my dream, I was at someone’s house, and the woman was loading the dishwasher, but instead of standard dishwashing detergent / soap, she poured in a chocolatey cereal, something like Cocoa Pebbles.  Unfortunately I woke up and didn’t get to see how the dishes turned out, but I expect it would be the opposite of clean.    [Edit: Mango-Man sent in a picture to go with the post, so here it is.]

I don’t know how or why my brain created that scenario.  I’ve never wondered what else you could put in a dishwasher besides soap.  Although this does remind me that I heard someone once joke about putting their underwear / drawz in the dishwasher instead of dirty dishes, but I don’t think that’s a recommended usage, especially if there are dishes in there also.

4 thoughts on “you put WHAT in a dishwasher?”