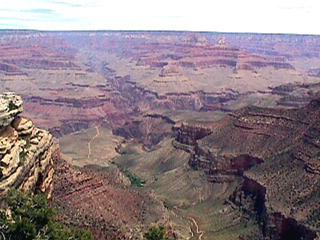 I saw a TV show on the History Channel that explained how the Grand Canyon was formed.  They said that many billions of years ago, that area was a massive mountain range, with peaks higher than the Himalaya Mountains.  I can believe that, at least the mountain part.  But then the story went in an unexpected direction.

These mountains were covered by the ocean at least 8 times.  I can easily believe they were at least once, but what do I know?  But then the mountain range flattened out, into flatlands.  There were no mountains, no valleys, and no canyons.   Then the land rose up, kinda like how mountains are formed from plate tectonics, but it didn’t create mountains — all the land rose up in that area.  (Can you picture that?   And can you believe that?)

To get the canyon-forming process under way, there was a giant lake, and it overflowed.   That’s what formed the Colorado River.   The lake is long gone, but the river still flows (obviously).  And over the past 5.5 million years, the water carved out the Grand Canyon.

Now you know.  Or well, you know what some scientists think happened.  The question is, are they right?  Parts of the story are believable, although I’m having trouble with the whole area of land rising evenly.  But either way, it’s interesting to think about.

I like watching these types of shows, because it challenges how I think.  It also gives me ideas on how to create my own Grand Canyon, so I can have a great view like that and make millions of dollars from tourism.  I’ll need to speed up the process, plus extend my life for a few years.   But I already plan to live forever — so far so good!  🙂

Anyway, back to reality, let me make a serious point (if the editor-at-large will allow that).   If the Grand Canyon was covered by ocean at least 8 times, who is to say it shouldn’t ever happen again?  And those things don’t just happen randomly.  There had to be some sort of… um… climate change… to cause such a massive event.   And probably not one or two degrees.  I’m just saying…