It’s a Monday, and it’s December now, so how about a Christmas-themed caption contest?  It sounds like a plan to me.   It works like always (if you aren’t familiar with them, I’ll explain).   I’ll post a picture, and you write a caption to go with it.   The caption can be dialogue from the people in the picture or analysis or commentary or just something funny to go with it.   Since a picture is worth a thousand words, there’s a lot of potential.  🙂

For this week’s picture, here’s Santa Claus being escorted down an escalator by Imperial Stormtroopers.  I have no idea what’s going on there, so perhaps we can figure something out. 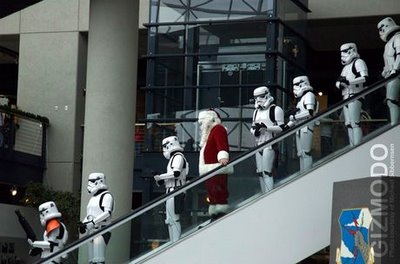