U.S. swimmer Michael Phelps dominated the swimming contests at the 2008 Beijing Olympics.  He won a record 8 gold medals in 8 events, and shattered 7 world records.  How does he do it?

Well, our investigative staff here took a look at his daily routine.  When asked what he was doing during the Olympics when not swimming, he replied, “I’m eating a lot of pasta and pizza.  I’m eating a lot of carbs.  And sleeping as much as I can.”  I could do that!  And I’d like to do that!

In preparation for the Olympics, he also swims a lot for training, which is expected, but so do all the other contestants.  So what sets him apart?  I’ve found that he eats over 12,000 calories per day!  That’s not normal!  So in the name of research, I’m going to start eating 12,000 calories per day to see if it makes me excel at what I do.

Here’s a listing of what he eats on a typical day:

Phelps lends a new spin to the phrase “Breakfast of Champions” by starting off his day by eating three fried-egg sandwiches loaded with cheese, lettuce, tomatoes, fried onions and mayonnaise.

He follows that up with two cups of coffee, a five-egg omelet, a bowl of grits, three slices of French toast topped with powdered sugar and three chocolate-chip pancakes.

At lunch, Phelps gobbles up a pound of enriched pasta and two large ham and cheese sandwiches slathered with mayo on white bread — capping off the meal by chugging about 1,000 calories worth of energy drinks.

For dinner, Phelps really loads up on the carbs — what he needs to give him plenty of energy for his five-hours-a-day, six-days-a-week regimen — with a pound of pasta and an entire pizza.

He washes all that down with another 1,000 calories worth of energy drinks.

For me, I’m going to substitute sweet tea instead of those energy drinks.  I don’t know how many glasses of tea it will take to get those 1,000 calories, but I can handle it.

Of course, if my daily workout doesn’t keep up with this increased caloric intake, I run the risk of looking like this: 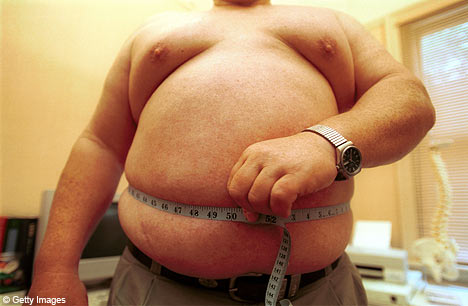 But I reckon someone should test out this crazy new diet plan, in the name of research…

4 thoughts on “new diet plan based on Michael Phelps’ success”