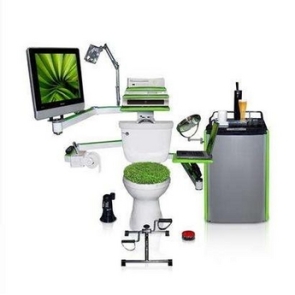 We’ve had a discussion here on how to make the best bathroom, but we figured most of those ideas would never be realized (unless one of us becomes crazy-rich).  Well, Roto-Rooter now has a sweepstakes where you can win the ultimate “pimped out john”.  Yeah, it’s a toilet with almost all the luxuries you could think of.  There’s a 20″ LCD flat-panel TV, an Xbox 360, DVD player, TiVo Series 2 digital video recorder (DVR), cooling fan that you can move, refrigerator, pedal exerciser for your legs, a laptop (on a stand), a magnification mirror, a USB-powered cup cooler/warmer for your beverage, and the toilet paper holder is also an iPod docking station (and the iPod is included).  But wait, that’s not all!  It also comes with a megaphone (which they say is for telling people about the toilet or asking for more TP, but I suspect some people would find other creative uses for it).

* Wives need not answer that question.  If a married man wins this, he would have to put his foot down and demand it be accepted.  There has never been a cooler toilet in the history of mankind.

BTW, you can enter once a day, to increase your odds of winning.  Although, realistically, you shouldn’t waste your time entering a lot, because I’m gonna win it.  🙂