I was showing some of the guys pictures of the “twin towers of cholesterol” today, and they were curious to see what the biggest burger ever made looked like.  So after much research* I found what I was looking for…

* research consisted of a quick google. 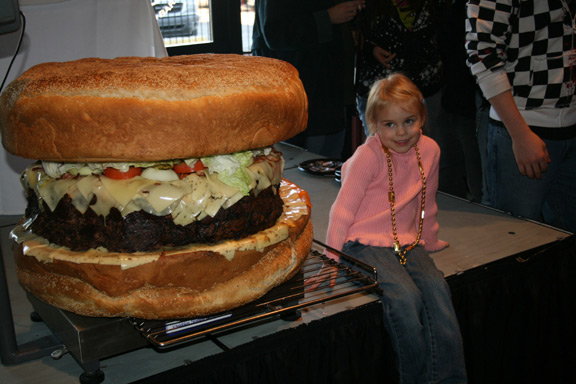 They claim that this is the “largest hamburger commercially available.”  And I would believe it!  Look at this monster!   For only $399 and 72 hours notices you can order your very own.   It’s actually on the menu!  (They also sell a 10-pound burger, plus a 1/2 pound burger for wusses.)

It appears we need to have another cookout at Fab’s to see if we can top this one.

I also found another burger that deserves “honorable mention” — they call it the bacon-cheese-pizza-burger!

Want to make one?  They describe how:

The site also states that they “will not be held responsible for your upcoming heart attack if you decide to eat one these monstrosities.”