If you haven’t heard, there’s a new A-Team movie coming out soon.  In a way, that’s exciting, because the original TV series in the 1980’s was great.  It had many memorable characters, most notably Mr. T playing B.A. Baracus.  (Do you remember what B.A. stood for?   Bad Attitude.)   B.A. was like MacGyver in that he could take anything and find a use for it, except he usually made weapons.  And he could beat people up.

Before I get to my point, let’s have a flashback.  Here’s a video of the intro to the TV series.

The new movie doesn’t feature any of the original actors, which often doesn’t bode well when they’re so well-defined and liked.  Some of them are just about impossible to replace, like Mr. T.  If someone tries to act like him, it’ll be obvious that the new guy is an impostor.   I just don’t see how anyone could recreate the part without being generic.   A possible solution to this dilemma is to drastically change the main characters.  Normally this sucks, and long-time fans will gripe incessantly about how the franchise was ruined.  This has been attempted in many movies, typically with disastrous results.  But there is a method that hasn’t been tried yet, which might could actually work:

The main characters in the new A-Team movie could be midgets! 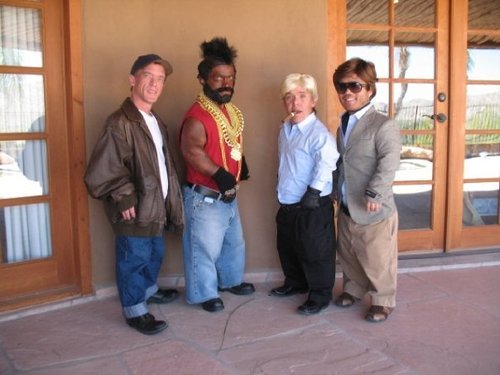 That way, it’s not pretending to be authentic, so there’s no comparisons to the ’80s TV series.  And think of the potential of having midgets play those characters…  🙂