In recent years I’ve heard some “experts” on TV say you should eat light on Thanksgiving so you don’t become obese.  First of all, that’s stupid, and second, the research doesn’t support such tomfoolery.  According to a study, the average weight gain for the holiday season (including Thanksgiving, Christmas, and New Year’s) is just 0.8 pounds.  That’s not a typo.  For all the hype from the media outlets, you’d think people were becoming instantly obese from a couple of big meals.  0.8 pounds is nothing — you can gain that just from eating normal, or if your regularity is not as regular.  I figured the number would be higher, given the big holiday meals, the extra cookies, and the parties. 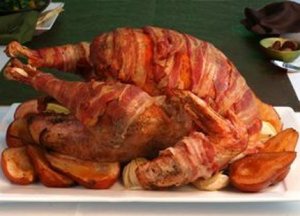 Obviously some Thanksgiving meals are more fattening than others, but a traditional feast shouldn’t be that bad.  I figure a normal Thanksgiving dinner wouldn’t be more unhealthy than some of the things you can get at restaurants, particularly all-you-can-eat buffets.  Plus you might be eating less processed food, which could make it healthier.

To diet on Thanksgiving day and Christmas day is foolish, if you want my opinion.  It’s hard enough to diet and eat right, particularly if you enjoy eating.  To miss out on the most special meals of the year would be depressing.  If you’re seriously trying to lose weight, one way to approach it is to eat healthier in the days leading up to the big meals, to rationalize eating a lot at the family get-togethers and parties.

Of course, common sense disclaimers apply.  For example, if you’re on the verge of a heart attack or some other severe health problem, maybe you shouldn’t eat a huge meal, but in that case, you should do something about it NOW.

Let’s get back to the study, if I may rant for a minute.  The health “experts” shouldn’t try to make people feel bad during the holidays if the research shows that the holiday eating isn’t the problem.  Here’s what irked me most about the article:

In the study, 14% of overweight and obese individuals gained more than five pounds during the holiday. In the abstract, the researchers wrote, “holiday weight gain may be an important contributor to the rising prevalence of obesity, even though absolute values for weight gain in this study were less than anticipated.”

Okay, so obese people gained more weight than average.  That’s not exactly breaking news, since they’ve obviously been gaining weight before then, so they’re just continuing the trend.  But notice the quote from the researchers, which basically says they’re still sticking to their hypothesis even though the statistics don’t support it.  Hopefully some people were reprimanded over that kind of junk.

So in conclusion, don’t feel bad about eating a few big meals during holiday feasts and parties.  The obesity problem isn’t caused by a couple of big meals here and there.  (Shouldn’t that be common sense?)  And the next time a news person on TV says to cut back during the holidays, eat another piece of pecan pie… or pumpkin pie… or cookies… you get the idea.  🙂  Eat, drink, and be merry.

So yesterday was Valentine’s Day.  I was wondering why people had balloons and flowers in their cars and why my wife was mad when we ate leftovers for dinner.  It may seem like a big day now, but with the passage of time, it’s just one day among thousands.  She’ll get over it.

Okay, so that’s an embellishment.  No, scratch that — it’s an utter fabrication.  I did remember the “holiday” and got my wife a mushy card and some roses and chocolate — got nice stuff, without spending a lot of money.  Some people sure are trying to rip you off this time of year!  But that’s a rant for another post.  I started this post to talk about bacon.  Yes, bacon and Valentine’s Day can go together.  Actually, I think they should.

Supposedly red roses are all romantic, but they look good for only a few days, then they wither and die a horrible death.  But what if the roses were edible and made of bacon?  Would that not be the best “roses” ever??? 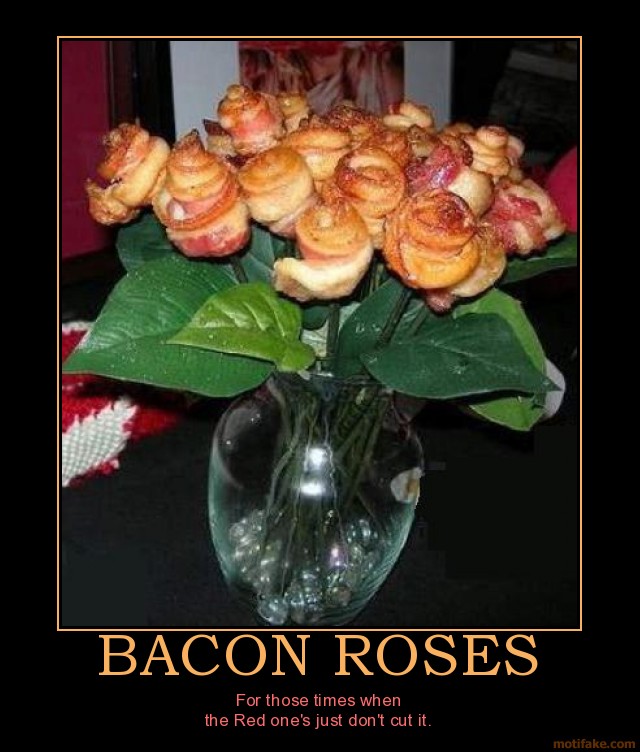 To me, a guy, it seems like a great idea.  But knowing women, it might be a turrible idea.  I remember I once asked a girl (who I wasn’t dating) if she would prefer roses made of chocolate, and she was adamant that it would not be a good thing.  Apparently, “someone” decided that you had to give red roses or you’re cheap and not romantic.  Hence the huge price increase on roses in February.  It sounds like a big conspiracy to me.

Anyway, about bacon roses, what do you think?

It has come to my attention that today is National Doughnut Day.  It is the first Friday of June each year.  Given how many special holidays there already are, you might think the day was created solely because donuts are awesome.  While that is sufficient reason, it goes even deeper.  The holiday was started in 1938 to honor the tradition of the Salvation Army providing donuts to soldiers during World War I.

Some doughnut shops give away a free donut on this day, so that might be worth checking out.  Even the cheapest of donuts — typically a simple glazed one — is great.  And while you’re there, you might as well pick up a chocolate-filled donut.  (It still boggles my mind that Krispy Kreme doesn’t sell a chocolate-filled donut, which is the best kind!  It’s stupefying!  It’s inconceivable!)

In case you aren’t aware, Krispy Kreme stores that make the donuts will sometimes give away a free glazed donut fresh off the assembly line, and that alone might be worth the trip.  The donut almost melts in your mouth with warm, yummy goodness.  (It’s probably a good thing the closest one is 30 miles away for me, or I’d be there too often.)

BTW, if you are a grammar perfectionist who is about to leave a scathing comment about how my spelling of donut changed, realize I chose to use both spellings interchangeably.  It’s my prerogative.  (And it’s also a good strategy from a search engine perspective.)

There are a number of special days and holidays each month, which have been discussed here at Buffet o’ Blog.  For example, here’s the one for June.

For this week’s caption contest, I’m using a Christmas-themed photo.  Well, it features Santa Claus, so it’s festive and stuff.  But this is no ordinary holiday photo — Santa is driving an armored SWAT truck, and he’s being followed by a helicopter.  So obviously there’s some action story behind this picture.  And it’s up to you to write the story.