What would happen if a bear attacked Chuck Norris?  There is a video from Walker Texas Ranger that resolves the question.

As you can see, the bear made a surprise attack on Chuck Norris from behind.  Obviously the bear didn’t realize who he was messing with.  Fighting a bear while laying on the ground would be a losing proposition for most people.  You might have dreams of how you would fend it off, but a bear is so many times stronger than a normal human.  But of course, in this video, this isn’t an ordinary human — it’s Chuck Norris.  So he wrestles the bear back, stands to his feet, and then stares the bear down.  I figure his “death stare” was probably conveying the information “I’m Chuck Norris, and if you don’t depart immediately, you will surely die.”  Wisely, the bear left.

I like how they used a judicious amount of slow-motion footage, to add drama to it, even though there’s no way Chuck Norris gets killed by a bear.  And it’s humorous how the woman picked up a stick like she was gonna help, but she just stood there watching.

Oh, and BTW, Chuck Norris doesn’t bleed.  I know it looks like there was some blood on his shirt and hand, but it was either the bear’s blood, or he had some ketchup packets in his pocket.

It’s time for our weekly caption contest.  Since I’ve been hearing a lot about golf on TV (something about Tiger Woods trying to win the U.S. Open), I figured I’d post a golf-related picture this time.   But this is golf-gone-bad, in that a bear has entered the green (putting area), and the golfers might be in for a bad day.  So figure out what the golfers might be thinking or saying, or what the bear is thinking, or what the TV announcers might say in this situation.  And share that caption in a comment, for us all to enjoy. 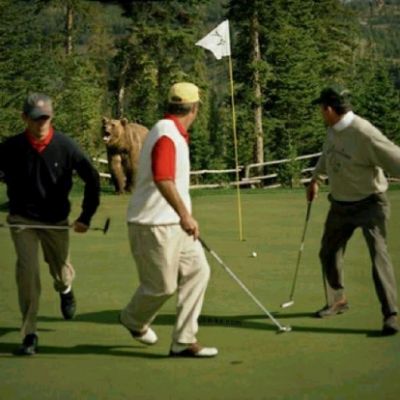