New posts were in short supply last week with the extended holiday — there were a lot of Thanksgiving dinners to attend — but now things are back to normal.  So let’s kick this week off with a caption contest, as is our custom.

This week’s photo is quite unusual.  I really have no idea what’s going on here, except that a guy is standing in the middle of the road with his pants down and his shirt off.   There are a lot of other people around, but at a distance.  Since I have no context whatsoever for this picture, we’ll just have to make it up.  That’s where you come in.  Explain what could be going on here, whether realistically or not.  Just make it funny, and keep it clean. 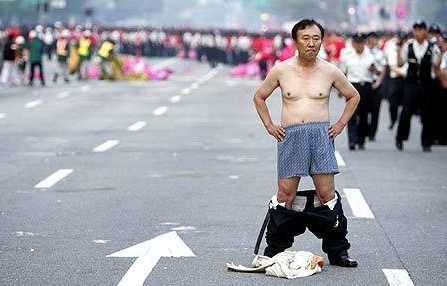 14 thoughts on “caption contest, man with pants down in public”