The staff here at Buffet o’ Blog all recently saw The 3 Stooges movie.  With us being all guys, we thought the movie was awesome.  It could’ve done without the woman dressing immodestly — there was no need for trashiness.  Overall, we thought it was very funny and mostly true to the original series.  However, somehow the movie concluded without there being a food fight. I don’t get it.  Such a scene was all setup at one point, and we all thought it was coming, but it never happened.  Were the directors trying to psyche us out, or did they just forget? 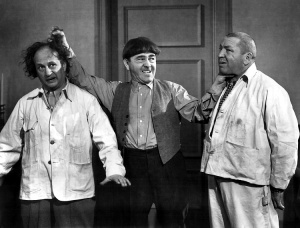 Anyway, this isn’t just a review of the movie.  I got to thinking about a further application of something that happened in the movie.  (Mini-spoiler alert.)  When Moe went to be on the reality TV show Jersey Shore, that was hilarious.  None of us watch Jersey Shore (do I even need to explain why?), but we all joked that it might be worth watching if someone like Moe was actually on the show.  (Well, I still wouldn’t watch that show because of all the immorality, but follow the idea.)  There are many shows that could benefit from the addition of The 3 Stooges.  The most obvious application is a parody movie involving them (or a reasonable facsimile) inserted into scenes reminiscent of other movies and/or TV shows.  But the concept could be expanded to all kinds of television shows.

I realize there are legal complications with this idea, but that’s for lawyers to iron out.  The point is, this idea would make many TV shows and movies more interesting, and you’d get more men to watch, which makes more money, so it’s a win-win situation.  Add The 3 Stooges to a chick flick, and it would become a romantic comedy that’s actually funny.  (Although the idea might not resonate well with women — some women find their brand of humor repulsive.  I don’t understand… wait, I already said that.)  🙂  Regardless of the gender culture gap, this could help many shows.

The next time you watch TV, imagine how the inclusion of The 3 Stooges would impact what you’re watching.  And if you want to take the idea even further, check out our post on how to make any movie awesome.  This idea fits in perfectly with that concept.  In fact, combine both ideas — take any show or movie, add the 3 Stooges, plus ninjas, car chases, wrecks, military-grade weapons, explosions, epic fight scenes, Chuck Norris, Jackie Chan, Mr. T, Buford T. Justice, Rosco P. Coltrane, etc., and it would be awesome beyond description.  (We should definitely be directing movies!)

Recently I came across YouTube video clips of a live-action Japanese Spiderman TV show from the ’70s.  This is something to see… prepare to be surprised, even if you know quite a bit about Spiderman.

If you watched the video, you might’ve noticed it was from 1978 and it featured a giant live-action transforming robot.  How long did it take before America got transforming robots?  Something like 1984, wasn’t it?  The Japanese have been ahead of us for a while on cartoons and sci-fi technology.

According to this other video (with a different theme song, one you may be more familiar with), Spiderman has a flying car (the Spider Machine GP-7), and the giant transforming robot is named Leopardon and belongs to Spiderman.  The song says he has radioactive blood, and he wears some type of mechanical device on one of his wrists.  I’m really curious about the story now…

On a related note, someone took clips from the Japanese Spiderman TV show and made a compilation video, adding NES-style music from Mega Man.  (NES = the original Nintendo system, in case you didn’t know.)

Spiderman’s pre-fight antics look amusing, plus his voice in Japanese is awesome (“SPYDA!”).  I’m gonna have to watch one of those episodes sometime…

Have you ever seen TV commercials that are cooler than the TV show you’re watching?  (If so, you probably need to watch something else.)  But there are a few commercials that come close.  My current favorite one is for the Nissan Juke, called Donut Action.  This is the longer version of the commercial (just over a minute), where the intern forgot the donuts for the business status meeting.

The whole commercial is cool, but I especially like the end, where he shows up with the donuts and says “Bang!”  Then the announcer says, “That’s right.”  Classic.

Also worth mentioning is the Geico commercial that asks, “Does a former drill sergeant make a terrible therapist?”

(I didn’t think he was terrible…)

We’ve received another e-mail from guest writer Thomas Wayne, as part of his “Embellished Memoirs of my Life” series:

I’ve been seeing these commercials on TV where some guy claims to be “The Most Interesting Man in the World”.  He’s a lie!  That is me.  He’s advertising DOS version 20, or somethin’ like that, I dunno.   Whatever…  What I do know is that I am the most interesting man in the world.  I don’t know how these commercial producers can sleep at night, after putting out false misinformation like that.  I’m the original “international man of mystery”, a real “distinguished gentleman”.   Anyone who doesn’t know this as common sense is obviously uncultured.  Maybe I should sue them, for defamation of character and misrepresentation.

I’m not surprised to hear that from him.  So what do you think?  Should he press forward with pressing charges?