Our weekly caption contest is running late, and I blame the snow.  (We never lost power or Internet connectivity, but extra time was spent playing in the snow.)   Since we just had a massive snowstorm / blizzard in the South, I figured a snow-themed caption contest is in order.  So here ya go.  You can write a caption from the point-of-view of the students, the teachers, onlookers, or just make a random joke or observation about it.  Anything is okay, as long as it is clean and funny. 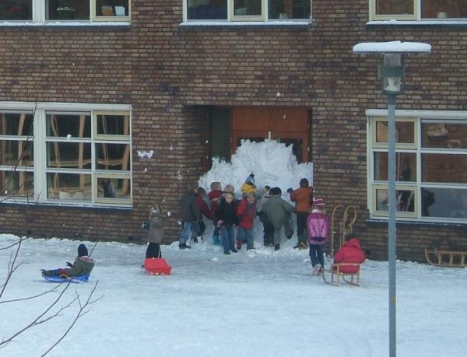 The weather here in Arkansas can be so random… yesterday I was outside playing tennis because it was 62 degrees, and tomorrow we’re expecting from 2 to 8 inches of snow.  For those of you from the north, that amount of snow probably means nothing.  But here, where it snows maybe once or twice a year, it’s a big deal.  It’s been all over the news.  And there was even a segment on the news dedicated to people buying all the milk and bread because snow was mentioned in the weather forecast.

I wonder if that happens anywhere else but the South.  If there’s any readers north of here, do you experience anything like that?  I’d guess not, because road crews clear the roads quickly.  Here, if snow sticks to the road, the town shuts down.  People start leaving work when they see snow falling.  When I used to work for a large IT corporation, I worked with clients in Chicago and New York City, and they would be shocked that people couldn’t get into work for two inches of snow.  But that’s how it is.  The roads don’t get cleared quickly, and there is little to no public transportation, and there’s often some amount of ice, whether initially or the next day.  That may seem weird, the town closing down, but I kinda like it.

Hopefully we’ll get a LOT of snow so I can build giant snow creations (like a snow castle).  And of course, a day or two off work is nice…  🙂