Here in Arkansas, it’s been over 100 degrees every day, and it was for much of June, too (which is not normal and ain’t right).  In case you’re wondering why, here’s a picture that was taken today.

Apparently the Earth is about 12 feet from the Sun now.  That must explain why it’s crazy-mad hot now.

The past few days have been so hot we’ve been trying to figure out how to describe it.  Wednesday it was 110 here with a heat index over 120, with lots of humidity.  I think that goes beyond crazy-mad hot.  Our local weathermen are running out of adjectives and phrases for the forecasts.

So we came up with a new heat scale:

* The day-star, it burns
* That ain’t right hot
* Crazy-mad hot
* Unbelievably stupid-hot
* Is this Arizona?
* This heat is inconceivable!
* Warmageddon
* Heatastrophe
* Hot Attack
* So hot that if someone says “Hot enough for ya?” you’re allowed to punch them.
* Did you replace my sweet tea with jalapeno juice?
* It feels like I’m on fire
* I’m on fire
* No really, I’m actually on fire it’s so hot

It’s even hotter than normal for August here in central Arkansas (as the last post so deftly explains), so I thought this week’s caption contest could have something to do with extreme heat.   I chose a picture of firefighters watching a fire tornado.  You get to write a caption explaining how this happened, or what the people are thinking, or what the cameraman is looking at instead of the fire tornado, or make up a story that’s somehow related to what’s happening in the photo.  Use your imagination…  see if you can surprise me…  🙂

Where is the hottest place in the United States of America?  Want to guess?  Reasonable guesses would include southern Florida, Arizona, and southern Texas.   Normally those places are contenders and one would probably be correct.  But if you live in the area which is the correct answer (as I do), you know.  Today the answer is central Arkansas.  Is that inconceivable?  I have the maps to prove it. 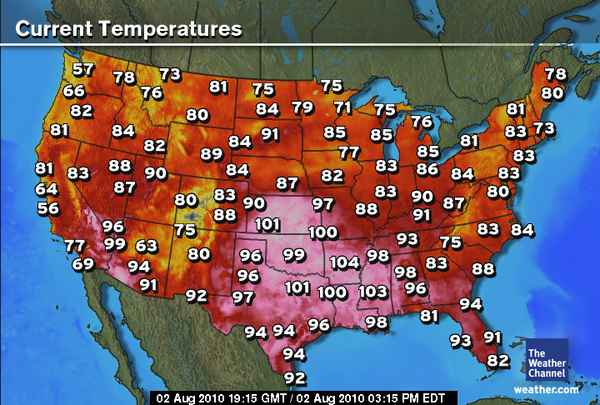 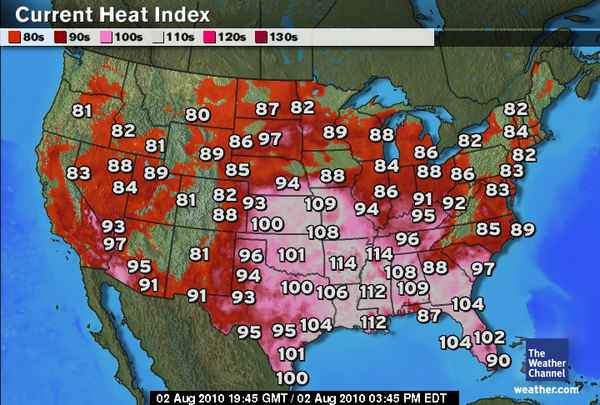 Why is central Arkansas the hottest place in the country?  We have excessive amounts of humidity, too!  We’ve been under a “heat advisory” for most of the past few weeks, but now we’re under an “excessive heat warning”, because the heat index may reach 120.   On TV The Weather Channel said the heat index in central Arkansas could reach 125 today.  I’m pretty sure we weren’t designed to operate in such extreme temperatures.

But why is this happening?  Is the weather broken?  I know, it’s easy to blame Global Warming.  But last winter we had snow more often than I can remember in one winter.  And last summer was the mildest summer I could remember.   (And my memory extends back quite a few years.)  So what’s going on?  Who’s tampering with the weather patterns?

If we get politicians involved in the discussion, it will be the usual story — blame the other party, or blame Bush.  (I’ve heard someone on CNN blame Bush for wildfires in California one time, believe it or not.)  What we need is a solution.  Fortunately, we’ve already had this discussion.   Now we just need someone to make it happen.  (While ice cream sandwiches might not solve the problem, they sure would make it more bearable.)  The case for this can be framed in many potential voting demographics — the heat is dangerous to children, to the elderly, to the unemployed who can’t afford their cooling bills, to illegal immigrants forced to work outside in unfair conditions, etc.  You get the idea.  So call your state representatives and tell them it’s too hot and we have a solution!