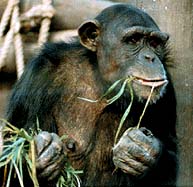 According to a new study by the National Academy of Sciences, chimpanzee genes have evolved more than human genes since they split about 6 million years ago.  First of all, this is stupid because we didn’t evolve from chimps nor from primordial ooze.  Second, this is stupid because even if evolution were true, how can someone think chimps have evolved more than humans?  We (humans) are obviously smarter.

10 thoughts on “Are chimps better than humans?”