I know it’s inconceivable that our weekly caption contest could be late, but there was a holiday, and I had company, and I had stuff to do…  (I could give more excuses if you want, but then this might be even later, and then it would be your fault that it’s late, and it’s not like I need more excuses.)

Anyway, here it is.  The photo features a person wearing lots of makeup.  No context is given, so you get to make it up.  There’s also not much going on, so you might have to provide a backstory or flashback or exposition.  Here’s some potential ideas: Is it war paint?  Is it a gang sign?  Is it some new, trendy style of makeup?  Is it someone you know?  Was it a prank?  What will happen next? 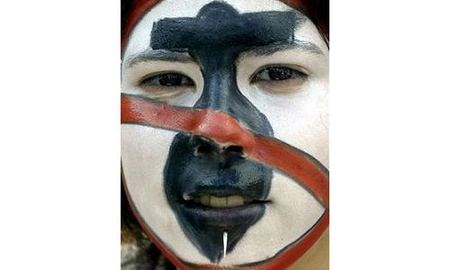